Sarah was interviewed last month in Johnson Bay, Rivers Inlet by Hans Peter Meyer, a writer and photographer, for his Coastal Forestry Industry Project. The project is an examination of the coastal forestry industry at this point of time in its history.

Sarah is a silviculture forester. Essentially, her job is to manage the replanting of tree species to replace those felled by her company, as legislated by the provincial government. Silviculture management requires Sarah to spend many hours in the field, supervising planting and brushing operations, surveying replanted blocks, and, on rare occasions, planting trees herself, where only a few (hundred) are needed to fill spaces in a previously planted area. (Brushing is the management of "weed" species, like alder, that grow more vigourously and shade the planted trees. Brushing involves the girdling or poisoning of these weed species to allow the more desired species enough light.) 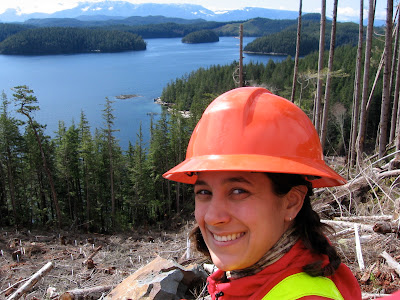 In the last five months Sarah has spent about 60 days in the field, the odd day out of Campbell River, but the majority camp shifts in inlets along the BC coastline. The camps are usually barges, like the one in Johnson Bay, above, and are reached by boat or float plane. The duration of Sarah's camp shifts range from a couple of days to more than a week, and she roams up and down the coast. Over the summer, Sarah has travelled as far afield as Ocean Falls and Bella Bella, 52 degrees north, on BC's central coast, working on and around King Island, from Burke Channel to Cousins and Kwatna Inlets and the Quatlena River.


Ocean Falls to Campbell River. Sarah operates in the 600 kilometres between the two towns, predominantly on the continental coast within terrain carved by ice-age glaciers. 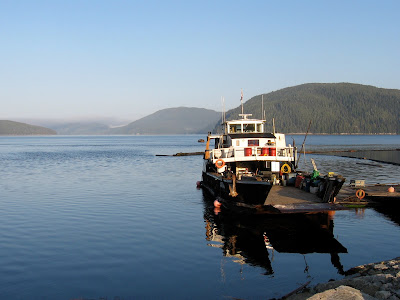 Lasqueti Daughters, a landing craft operated by a contracting company in the Quatlena region. Sarah had contracted the company to manually girdle alder trees, below. 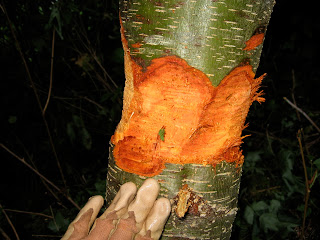 Ocean Falls, established as a pulp and paper mill town in 1906, has a classic West Coast boom town history, with a population at one time of 3,900. Today about fifty people still reside in the community, and Sarah brings home stories of the forest's encroachment on the town, as vegetation overwhelms decaying buildings and infrastructure. Ocean Falls has an annual rainfall of 172 inches, giving the green every reason to grow fast. 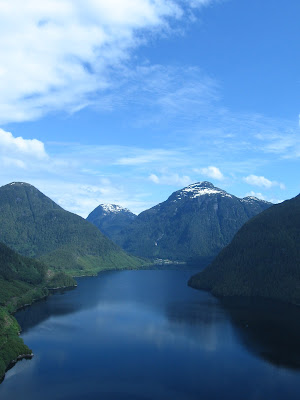 Ocean Falls, at the head of Cousins Inlet. 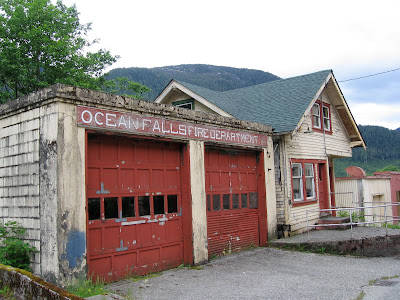 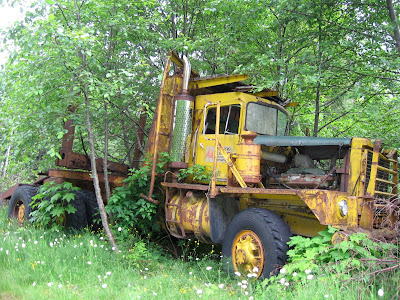 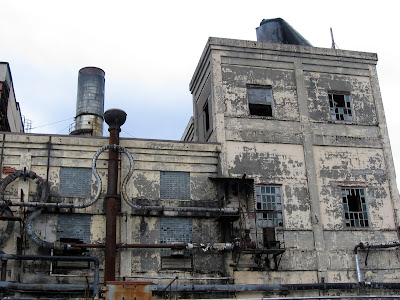 Further south, Sarah worked in the Rivers Inlet system, which includes Hardy and Moses Inlets, as well as Johnson Bay, the background to the videos above. 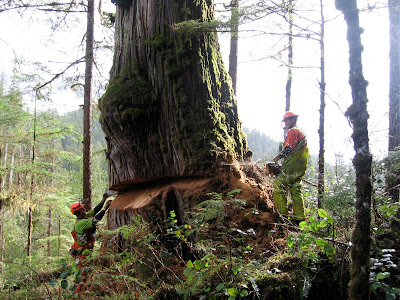 Falling a Western Redcedar, the provincial tree of BC, near the Sandel River in Rivers Inlet. 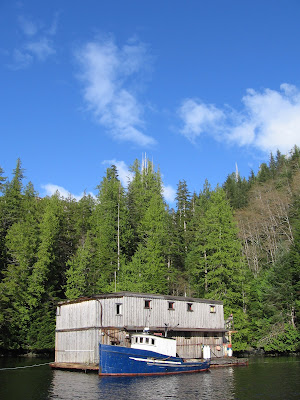 Closer to Vancouver Island, Sarah conducted regeneration and free-growing surveys in the Mereworth Sound region, which includes Boswell and Smith Inlets. Sarah also worked on Gilford and West Thurlow Islands, in Johnstone Strait, as well as Knight Inlet and Philips Arm. Access to work sites is generally by helicopter, Hughes 500 or Bell 206 Jet Ranger, or, occasionally, the Eurocopter AS350 Ecureuil (Squirrel) known in North America as the AStar. 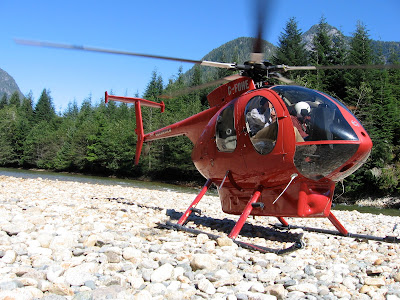 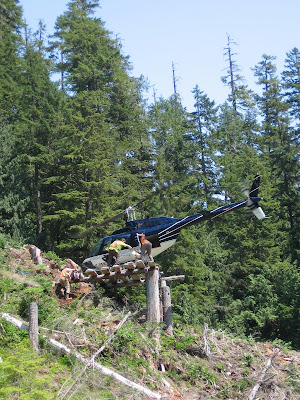 Time for a pick-up. 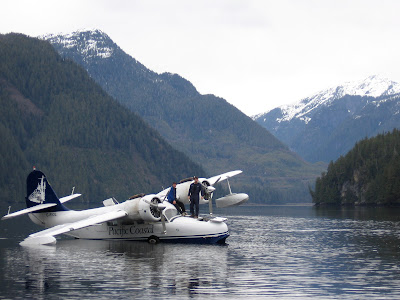 Grumman G-21 Goose in Moses Inlet. The prototype's first flight was in 1937.
Only about 30 are airworthy today. 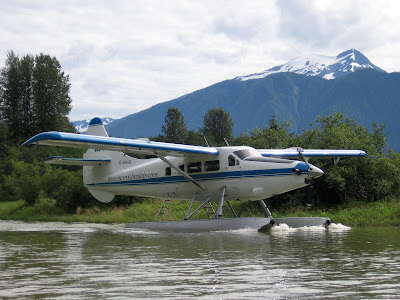 DHC-3 Otter, on the slough at the head of Knight Inlet.

A couple of weeks ago I had the opportunity to fly the route to Interfor's camp at the head of Knight Inlet from Campbell River. I flew in a de Havilland DHC-3 Otter, a STOL plane that first flew in 1951. My version was the float plane above. We taxied from VIA's dock, out the estuary at the mouth of the Campbell River, and took off from the salty brine of Discovery Passage. Our pilot was a grey-haried veteran; after delivering the safety briefing he told us the flight time was 30 minutes and the in-flight film was beautiful BC. Our route carried us over Quadra Island, Sonora Island and East Thurlow Island, as well as the smaller Loughborough Inlet. To the east was Mt. Waddington, the third highest peak in BC at 4,019 metres, and the highest mountain solely in the province, the other two resting on the border with Alaska. The Otter passed between two snow-capped mountain peaks and dropped into the space above Knight Inlet. Knight is one of larger fjords on the BC coast, about 125 kilometres in length and more than two and a half kilometres wide in places. The inlet was a milky swirl of mint with flecks of chocolate; heavy rain had fallen on the headwaters that fed the inlet, primarily the Klinaklini River, itself fed by the enormous Klinaklini Glacier. We followed Knight Inlet to its interface with the flowing water of the river. The Otter circled once over the camp, checking the conditions for landing, and then landed in the slough next to the camp. 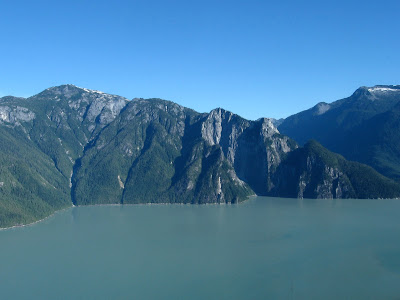 Nice post. Happy to see your embed of my video interviews with Sarah, and your link to www.coastalforestindustryproject.com
In the future, please drop me a note when/if you use my materials. I love to see how others are using them.
cheers,
hpm
@hanspetermeyer on Twitter

Matt
the River City, BC